On my last trip to Ulta, I passed by one of the new Essence displays and saw some fun pops of colour.  I remember hearing people talk about how Essence came out with these new shades, but I hadn’t actually seen them, so I was happy to be able to find it in-store. 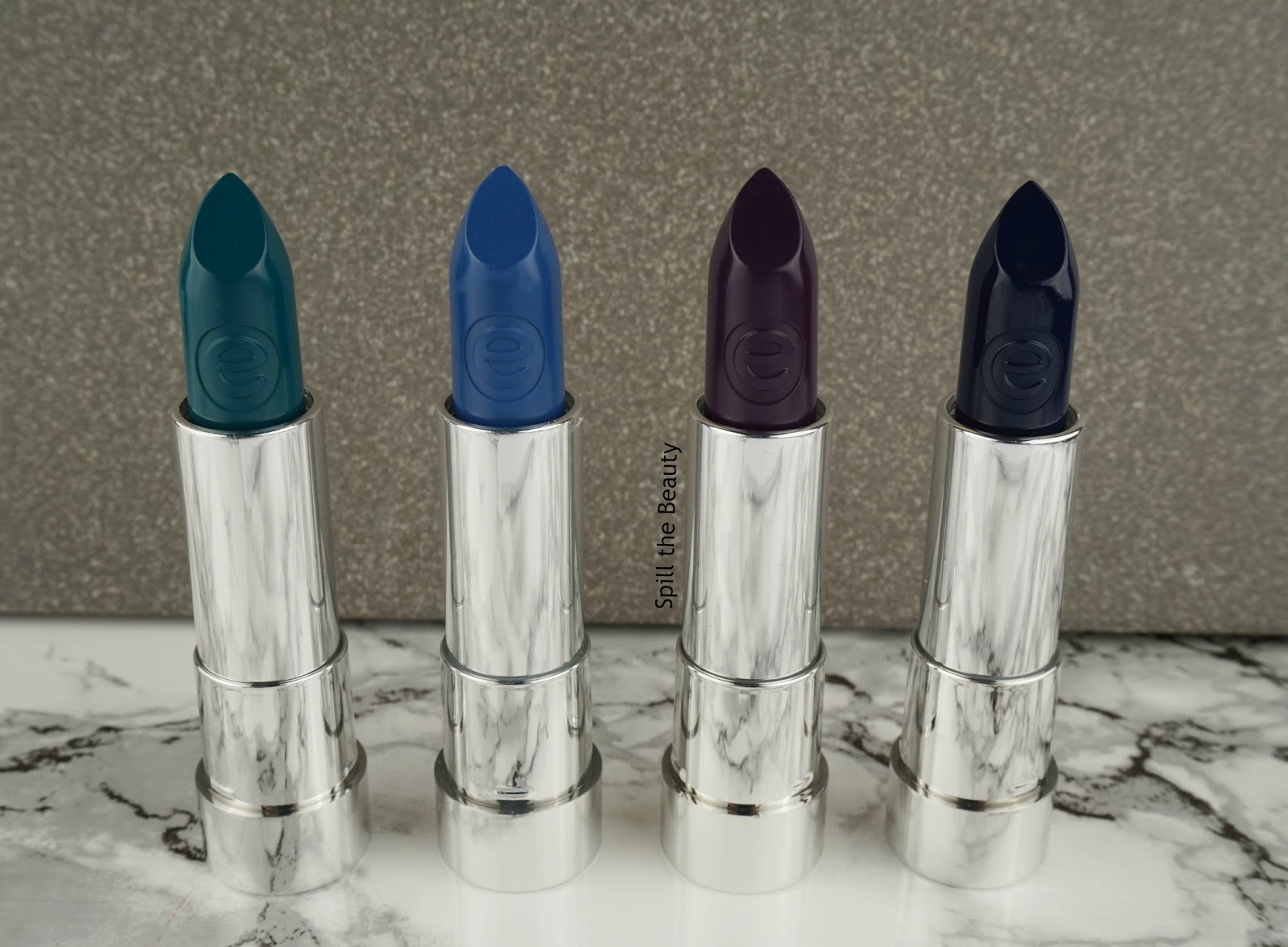 I had a hard time finding swatches online (although I’m now realizing that I probably couldn’t find swatches, because the actual name of the shade is in small writing on the sticker, on the cap – I thought these lipsticks were just named by the number on the bottom of the tube), so I decided to grab them and make my own swatches!

The collection contains four bold shades, in the ‘Matt Matt Matt’ formula, with a (of course) matte finish. 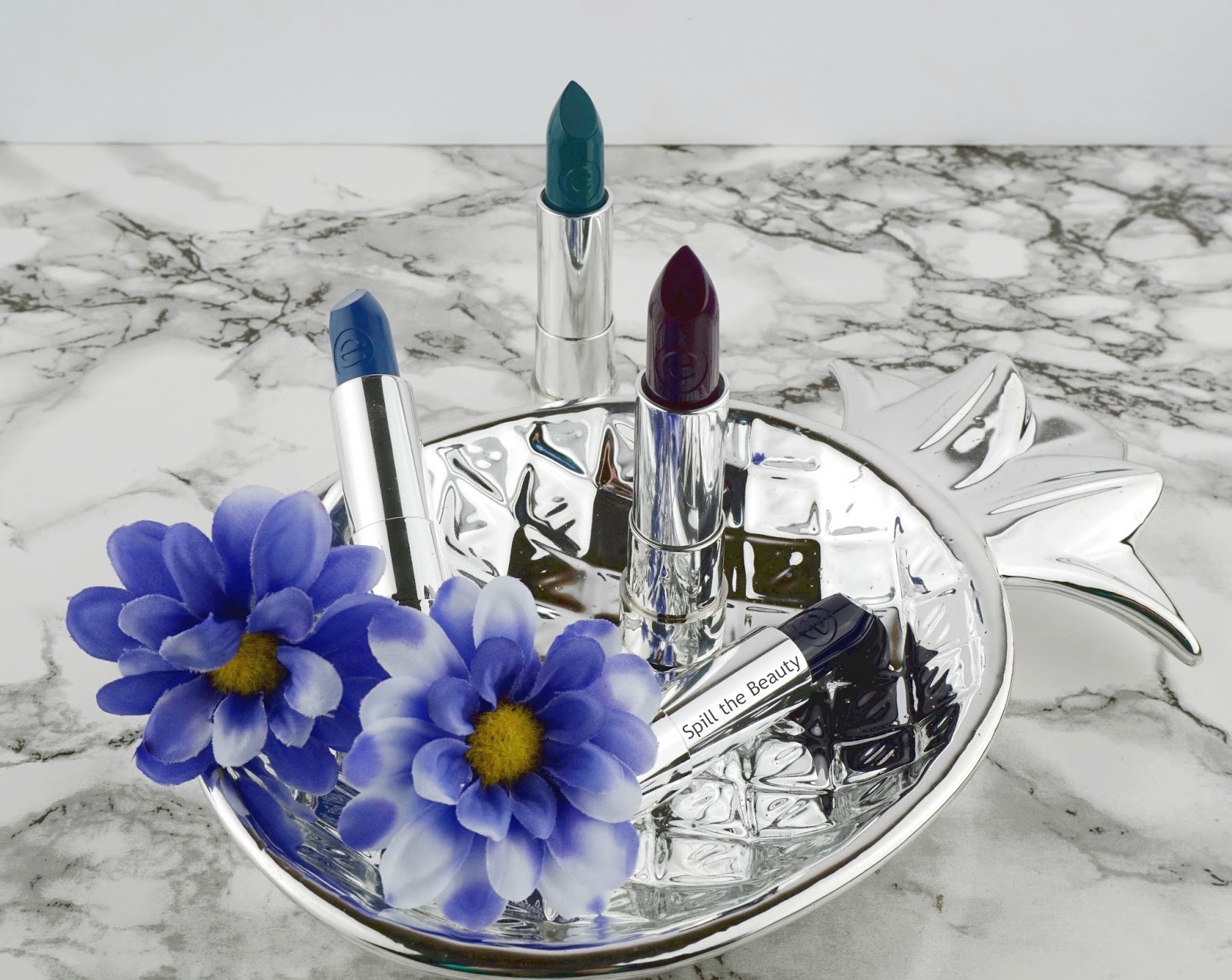 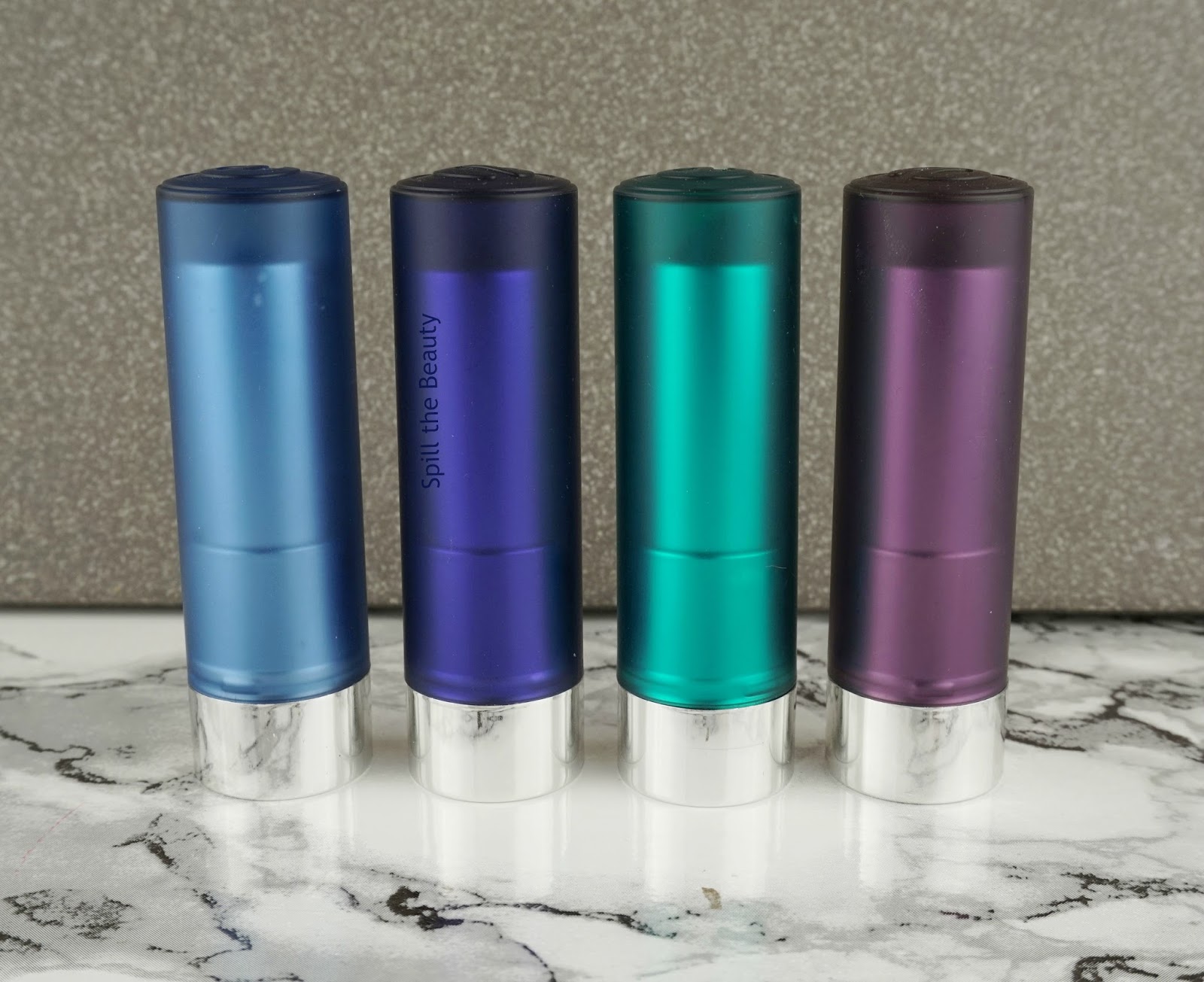 The lipstick bullet is the standard tapered lipstick shape, and has the Essence logo embossed, which is revealed when you twist up the product. 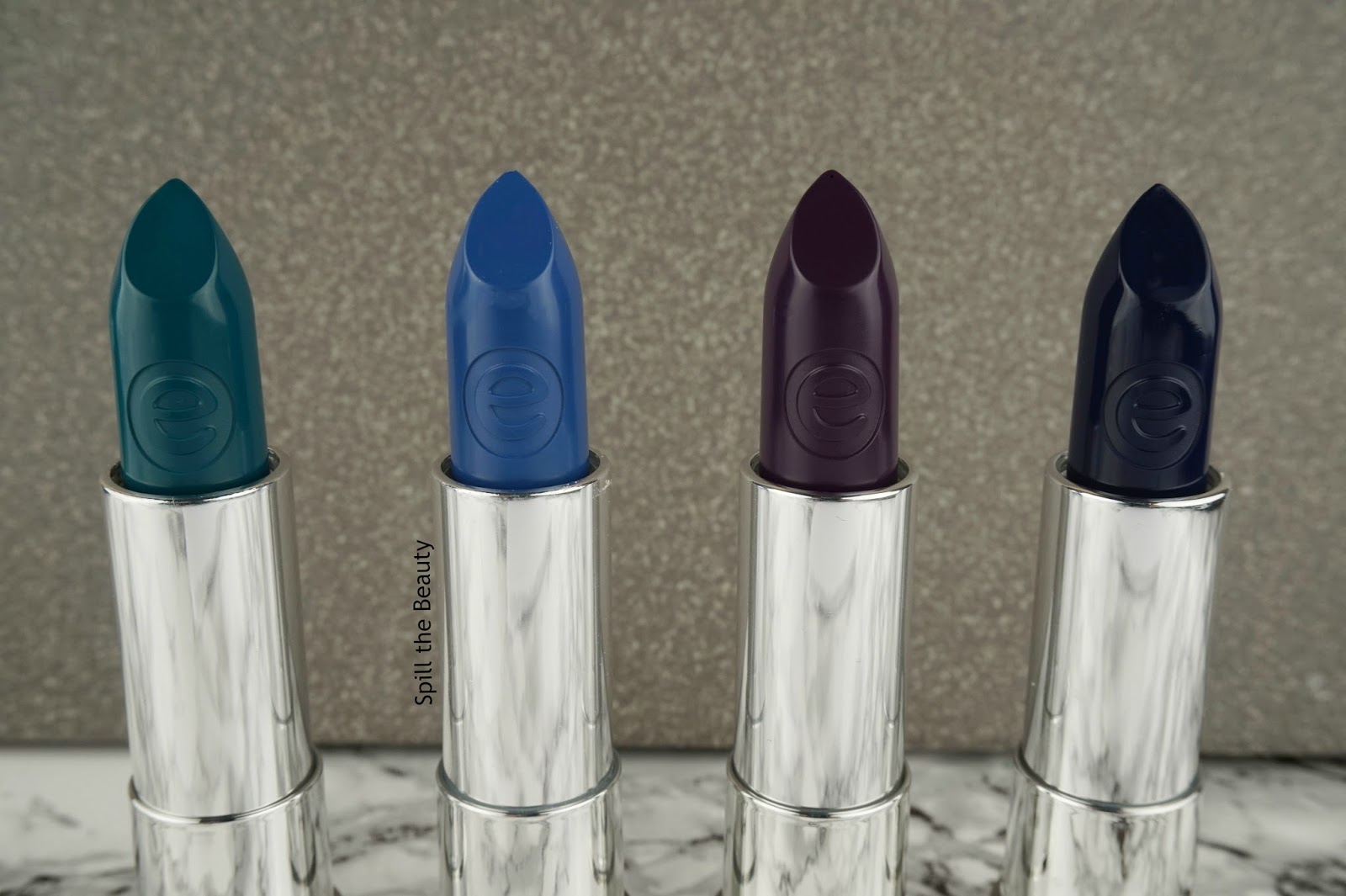 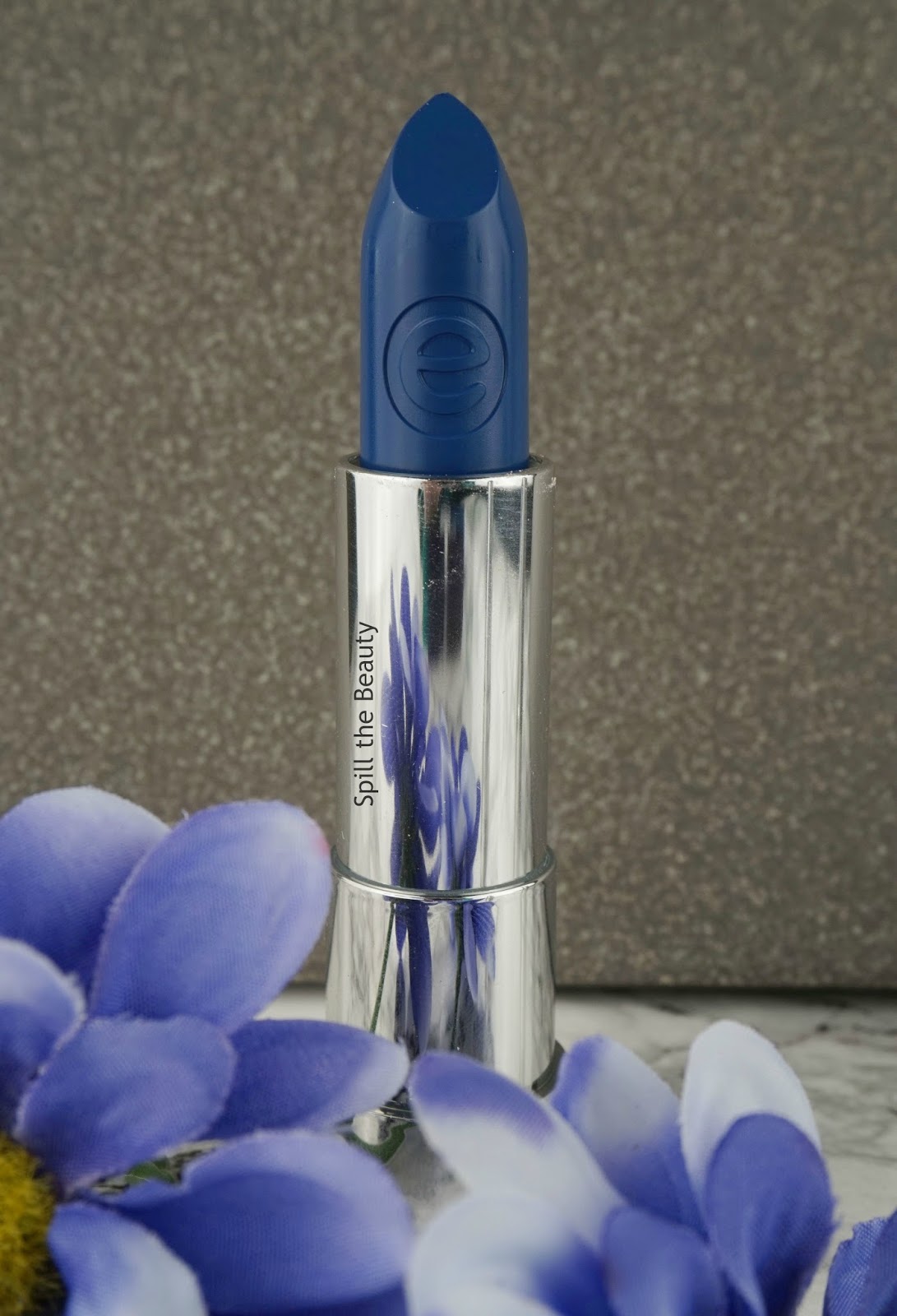 ‘Rockin’ Princess’ (09) is a dark midnight blue.  The formula on this shade was definitely the most difficult of the four – it dragged, was patchy, and instantly disappeared from the centre of my lips, when I rubbed them together. *sigh*  The hunt for a good matte dark blue continues. 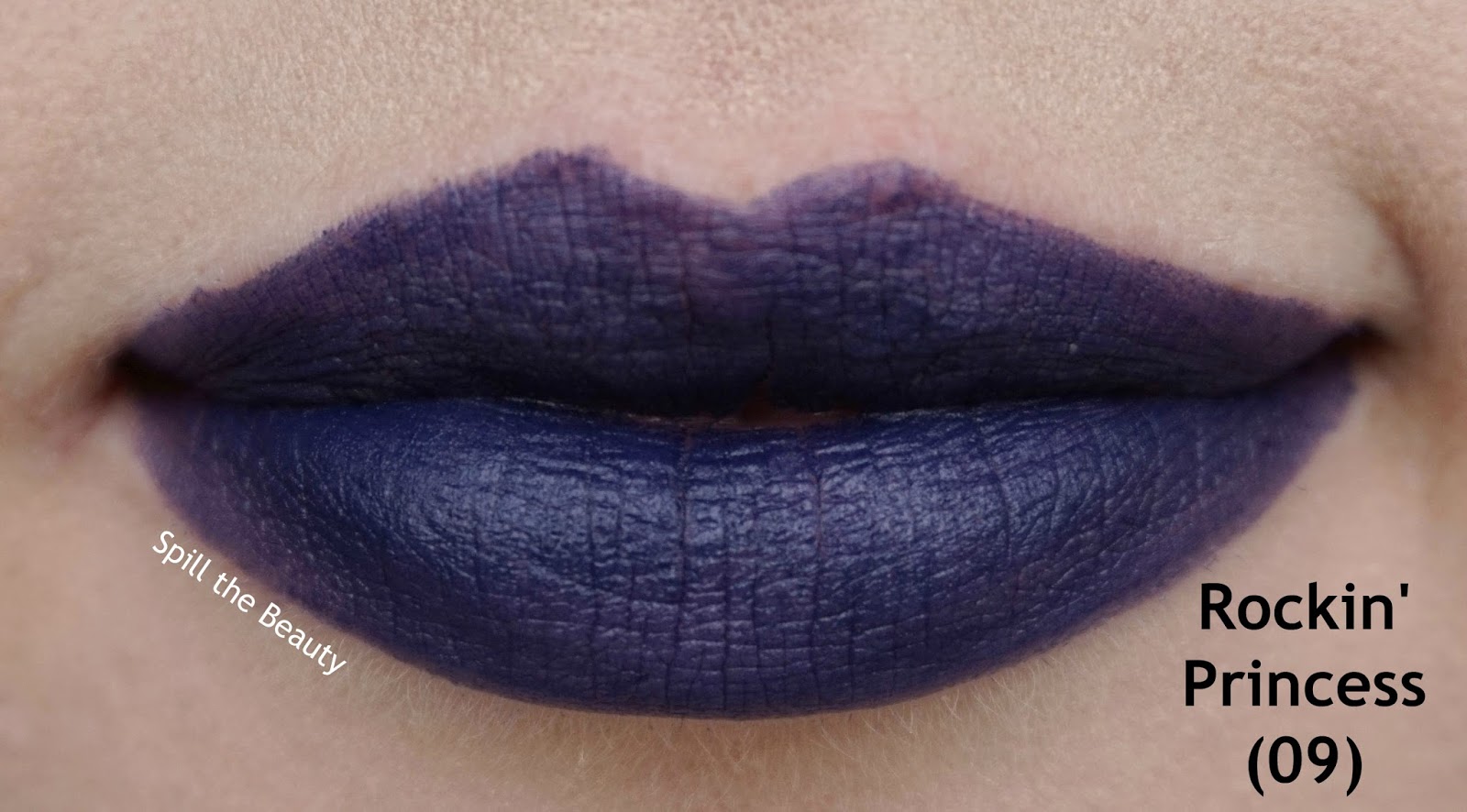 ‘No To Mainstream’ (10) is a pine forest green that has some teal and grey.  It needs a few layers to get full coverage, but you can achieve opacity.  The formula was slightly dry, and not as creamy as I would have hoped, but the slight dryness made for a consistent pigmentation (no dragging product during application). 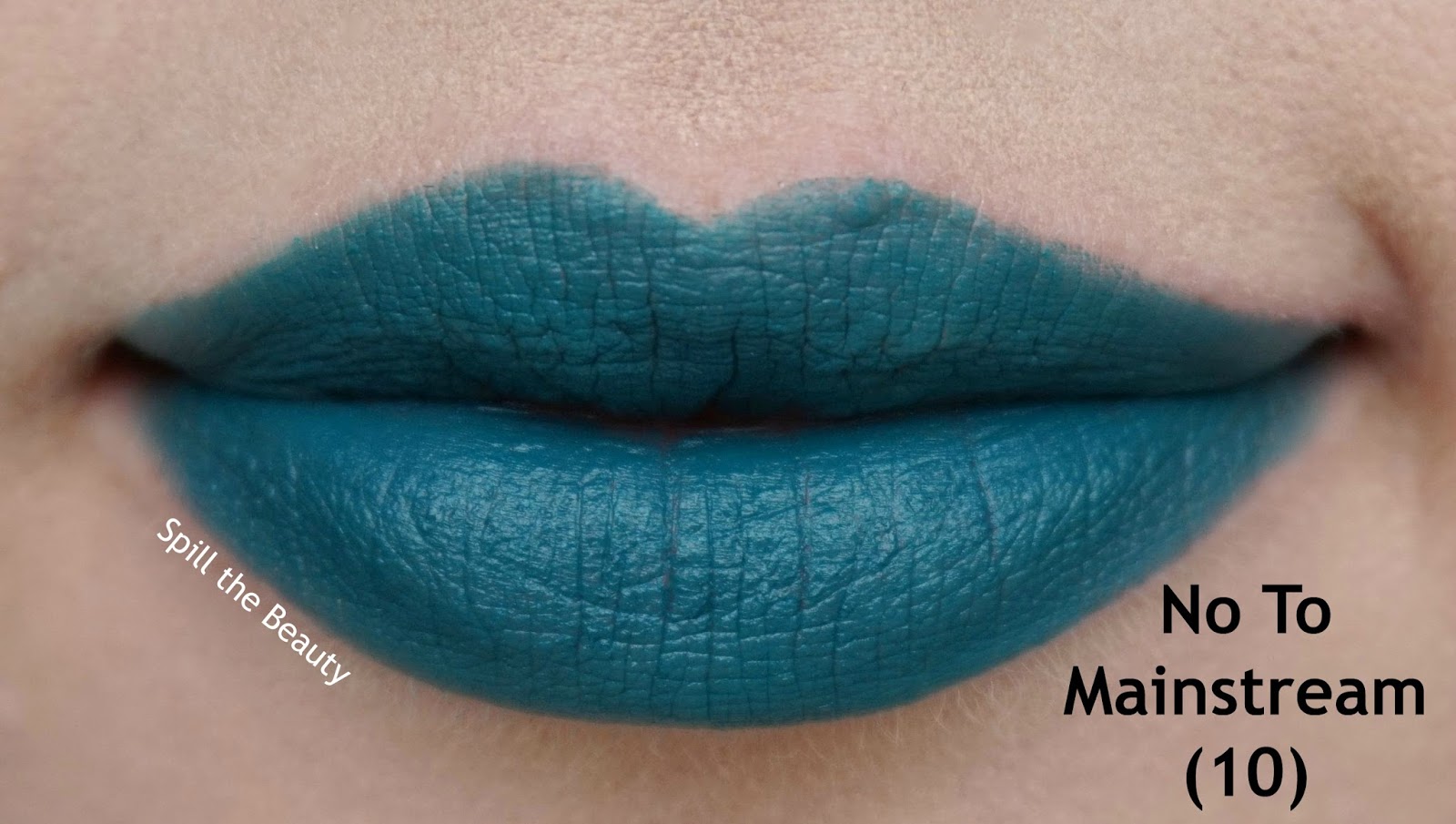 ‘Rave It Up!’ (11) is an eggplant purple that reminds me of the suit that The Joker from the original Batman comics wore.  It is a bit sheer and patchy, and did not have as good of a formula as ‘No To Mainstream’. 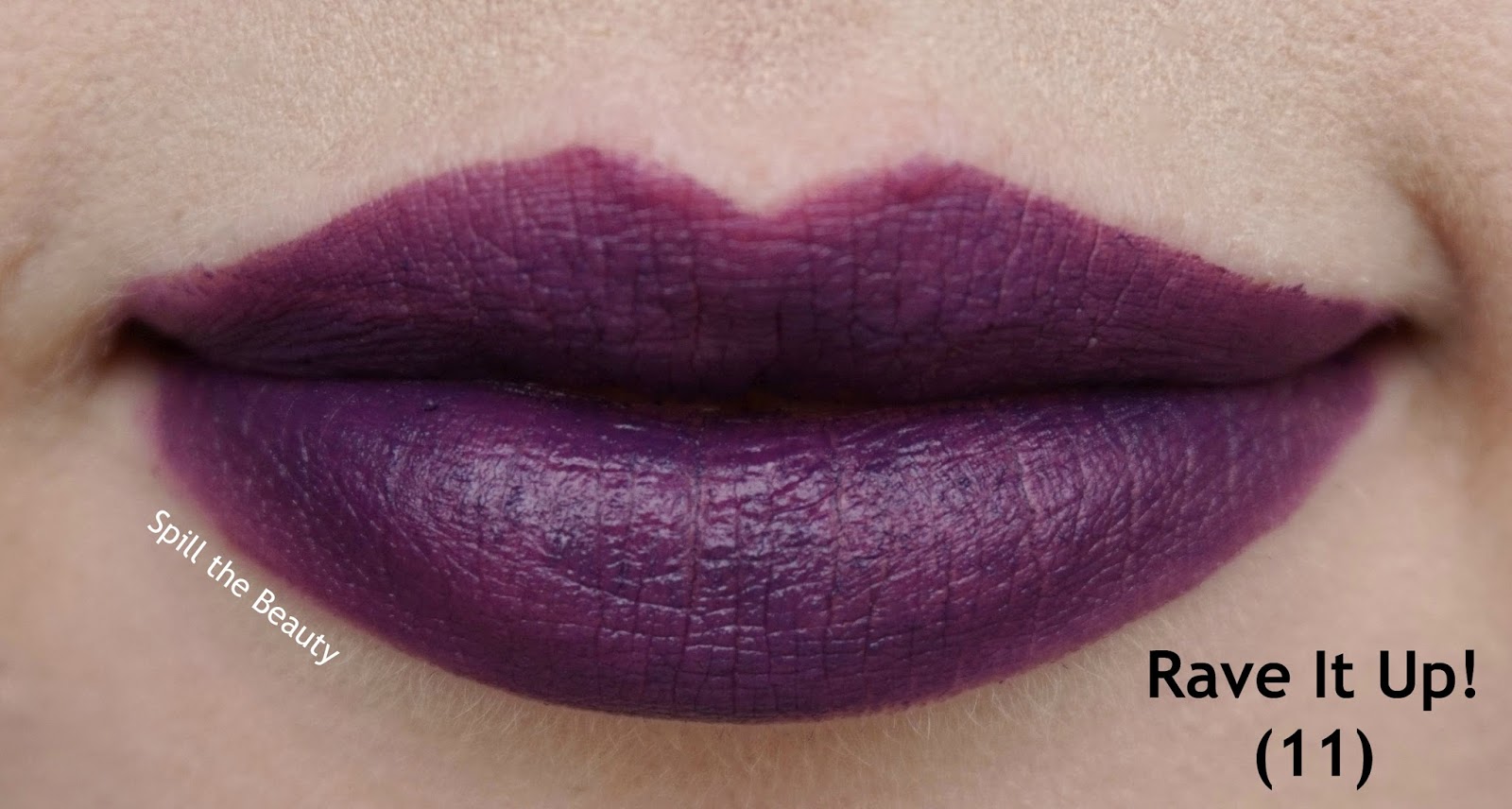 ‘She’s So Electric’ (12) is a denim prussian blue that reminds me of Lana Del Rey’s song, “Blue Jeans”.  The formula is just like ‘No To Mainstream’ – pigmented, and a bit dry, but gives good coverage. 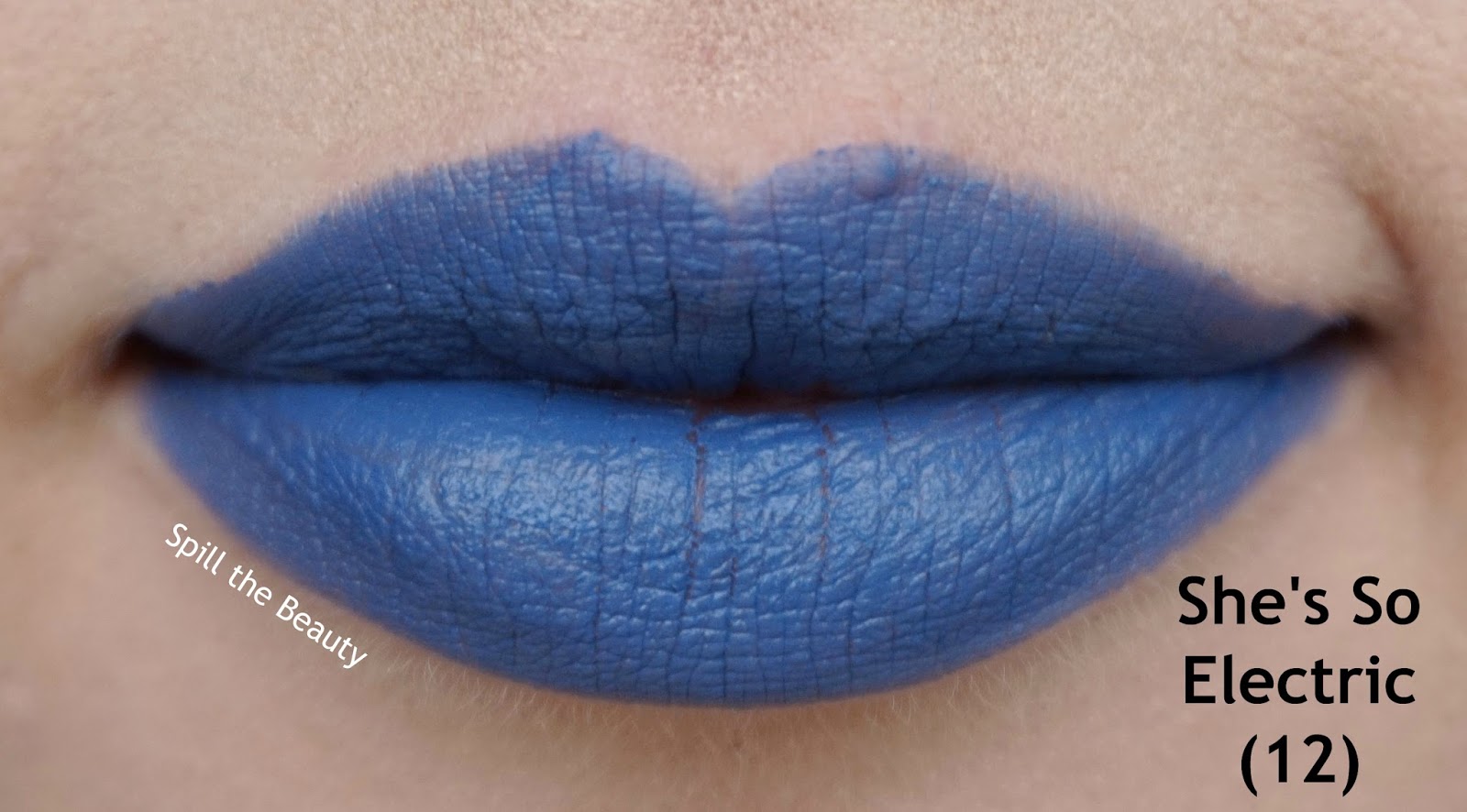 As far as formula, from best to worst, I would say: ‘No To Mainstream’, ‘She’s So Electric’, ‘Rave It Up!’, and finally ‘Rockin’ Princess’. 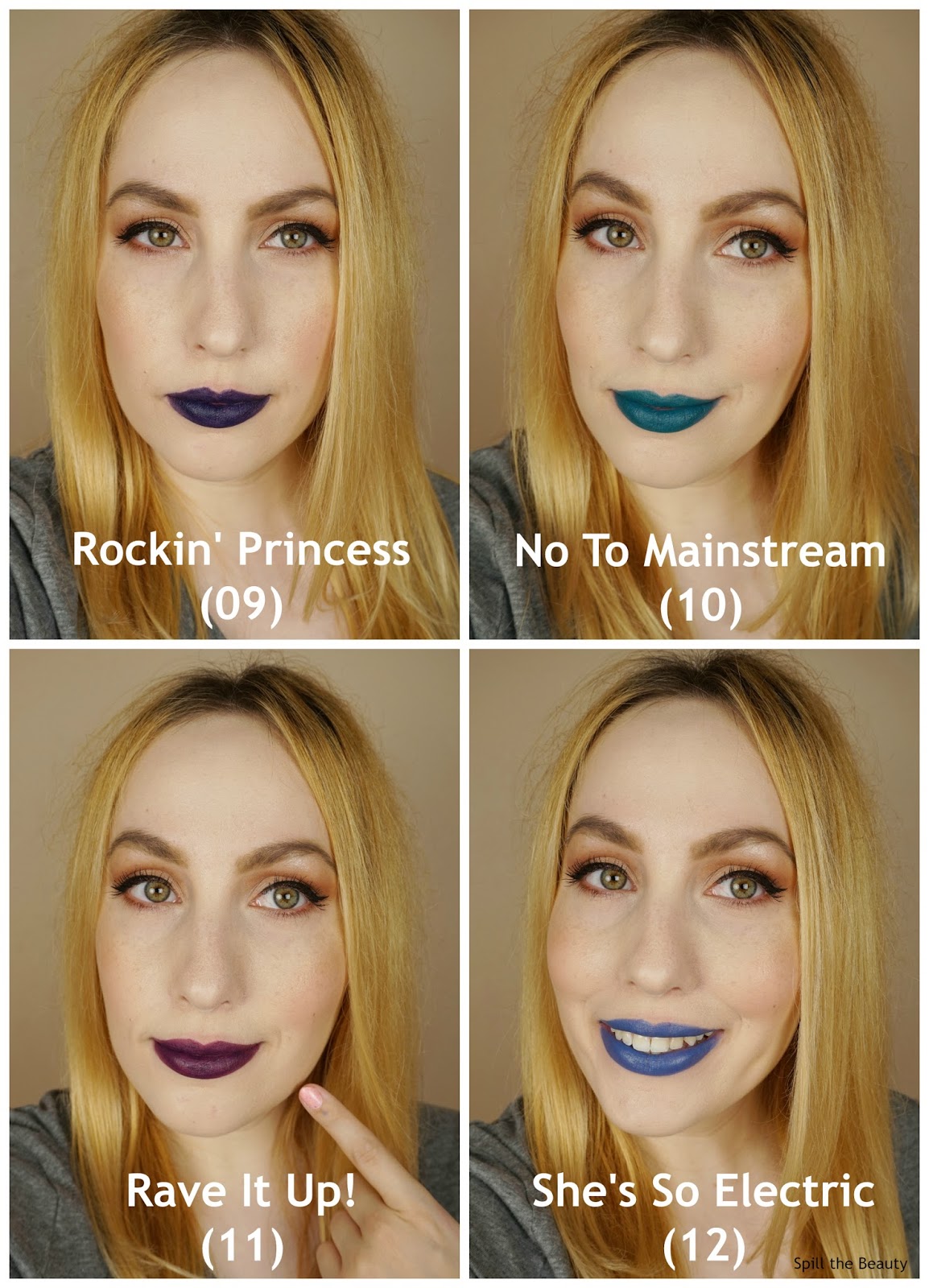 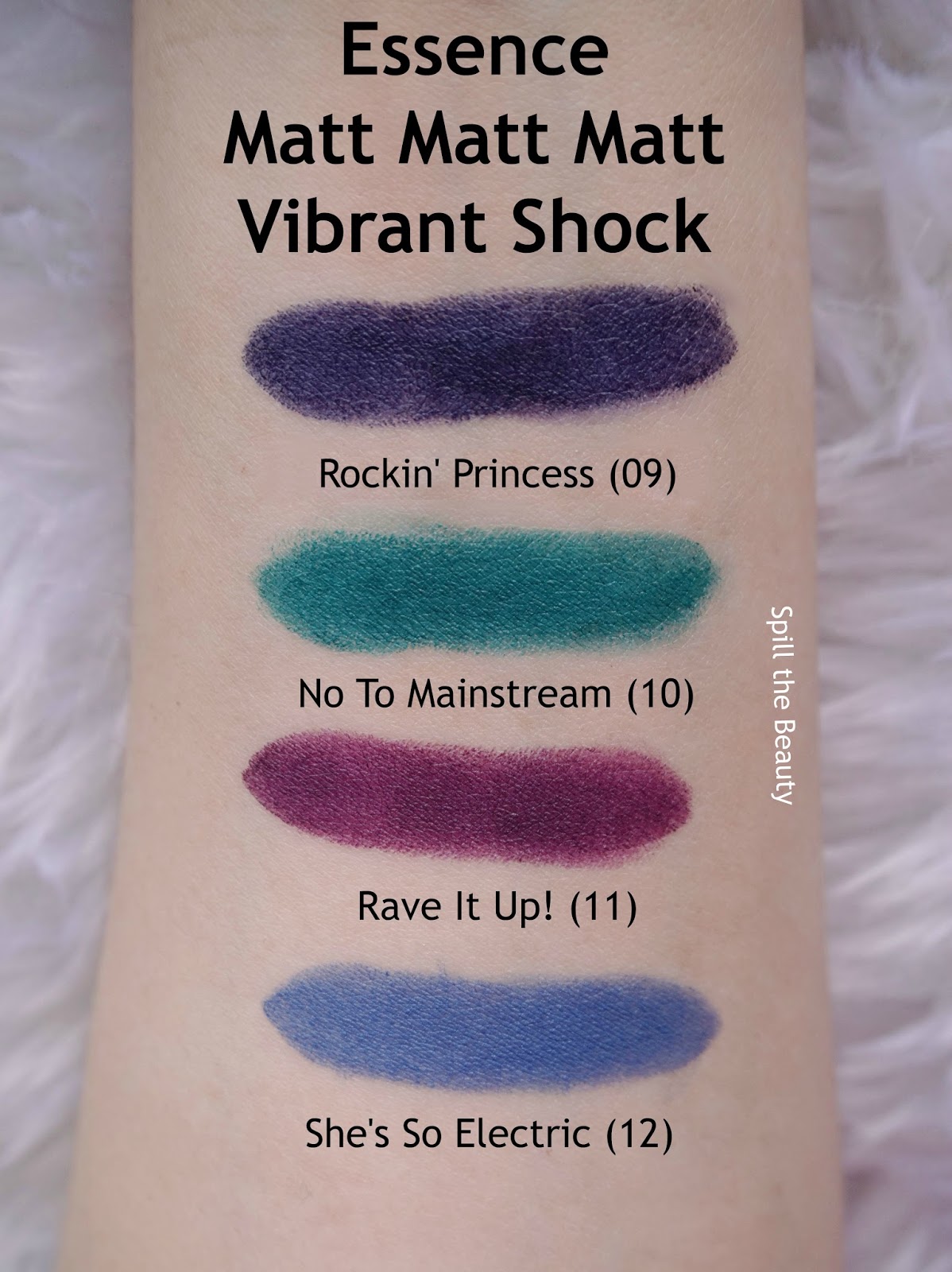 I will note that these lipsticks were quite comfortable to wear.  Although slightly drying, they felt extremely light and set very quickly.  They had that “barely there” feeling, which is funny because the colours themselves scream “HI, I’M HERE!”.

Think you could rock any of those shades?  Let me know in the comments below.